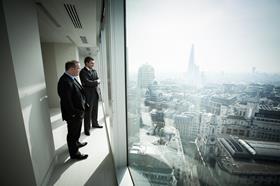 A proposed merger between Carillion and Balfour Beatty has a “50/50” chance of going ahead but if successful the deal could dramatically transform the UK construction market, analysts have said.

Analysts reacted with surprise to the news, which emerged last night, that the two firms were in “preliminary discussions in relation to a possible merger”.

Both firms’ share price rose around 10% on the news today.

Kevin Cammack (pictured), analyst at Cenkos, said he was “surprised” by the news of the talks. He said Carillion had told analysts that it had first approached Balfour Beatty around 8 weeks ago and has “already engaged in preliminary due diligence and sounded out financing packages”.

He said he viewed the proposal as “an opportunistic take over” of Balfour Beatty, rather than a merger.

He said if the merger went through it was “possible” it could herald the end of Balfour Beatty as a giant of UK construction.

He said Carillion has been downsizing it main contracting business and would likely do the same with Balfour Beatty if the deal went through.

He said: “Clearly Carillion do not want to be a major contractor, they have spent years trying to grow the services side and halving the construction business.”

He said the only way for Carillion to achievethe required “synergies” would be to cut back costs in Balfour Beatty’s UK construction business, as there was limited scope to achieve cost reductions overseas.

“Where the big money comes out is on the construction side of things,” he said.

He added that he only gave the deal a “50/50” chance of going through.

“It boils down to two things. Can Carillion satisfy themselves the risks are sufficiently measurable to give you confidence that you can crystallise the savings to give you value?

“There’s a point at which the due diligence may stop you thinking you can do that.”

He said because Carillion was the smaller of the two firms, the key was whether the Carillion board could convince shareholders they would get good value out of the deal when they were likely to “end up with less than half of the equity of the combined business”

He said Carillion’s record on achieving a return of “over 10%” on its investments in the acquisition of engineer Mowlem in 2005, contractor Alfred McAlpine in 2008, and solar energy installer Eaga in 2011 had been mixed.

In a briefing note, analyst Liberum said discussions we like at “a very early stage” and a deal would likely wait until the outcome of the Parsons sale.

“We would not expect a ‘merger’ to complete until the end of this year at the earliest,” the analyst said.

Liberum said there was a “huge overlap” between the business, both in geography and markets and there was potential for £250m in synergies.

The firm said other bidders for Balfour Beatty could include Hochtief, Vinci and Bouygues.

“However, none would have the same geographical and business overlap as Carillion and could not replicate the synergies,” Liberum said.

He said the “last two options are less likely”.

He said if Carillion ended up buying Balfour, it was likely that current Carillion chief executive Richard Howson would assume the role of chief executive of the merged company, and Carillion’s finance director Richard Adam continuing to head the newly merged firm’s finance department.

He said Carillion had a strong position, given a number of recent major contract wins, such as five of the Ministry of Defence’s recent Next Generation Estates Contract awards, which together are worth up to £4.5bn.

“Carillion comes from a position of strength, given its operational excellence and recent contract momentum.”

He added: “Contractor consolidation has always been compelling since margins are typically low, but synergies high. “Carillion’s experience and centralised management makes it an excellent integrator.”

Andrew Gibb, analyst at Investec, said it was “inevitable” that Balfour Beatty would be bought following its move to sell consultant Parsons Brinckerhoff.

He said if the firm did not end up merging with Carillion it would likely be bought by another firm, adding that French giant Bouygues or Chinese firms could also be possible buyers.

He added he “would not be surprised” if the Competition Commission wanted to run the rule over any merger.

He added: “[Carillion and Balfour Beatty] are already the big boys, although Carillion less so, they would be a force to be reckoned with.”