New projects include Bristol and Bucks academies plus primary school 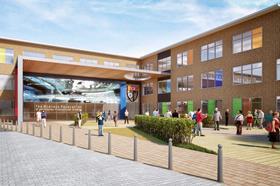 BAM Construct has been selected as preferred bidder for a £19m addition to Winterbourne International Academy in Bristol, as well as two schools contracts in Buckinghamshire.

The contractor said the Winterbourne job would see the construction of a three-storey facility in the courtyard of the academy’s existing buildings, along with the extension of a technology block, and the demolition of “many” of the school’s current buildings.

It said the work for the Ridings Federation of Academies was due to commence in August and was due for completion in December 2014.

In Buckinghamshire, BAM will build a new wing for Chiltern Hills Academy and refurbish other parts of the Chesham school as part of £10.25m worth of work.

Elsewhere in the county, it will build a £6m primary and nursery school on the same site as Aylesbury Vale Academy, which BAM was selected for through the Partnerships for Schools framework.

BAM also said that the first phase of its £9.5m overhaul of Plymouth’s Marine Academy would begin in July, as would its £6.5m contract for Bristol Free School.

Both contract wins have already reported by Building.co.uk