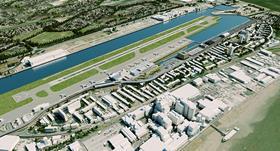 Bam Nuttall has been appointed by London City Airport to build a new concrete deck extension.

The £85m deck is the first stage of the £480m City Airport Development Programme, which includes aircraft stands, a parallel taxiway and a passenger terminal extension.

Under the contract Bam Nuttall will extend the airport’s concrete deck out over the King George V Dock supported by over 1,000 concrete piles with steel casings – each approximately 20m in length.

Works will start later this spring, once the unexploded ordnance survey is complete, which recently discovered a 500kg Second World War bomb.

Completion of the deck is expected in early 2020.