Firm is also carrying out work on neighbouring building 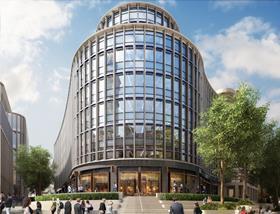 Work on Carillion’s One Chamberlain Square at Paradise Birmingham has restarted, with Bam taking on the job

Work was been stalled since Carillion went bust in mid-January.

The majority of subcontractors who were working on the building will return to site from today.

Rob Groves, regional director of developer manager Argent, said: “Ever since Carillion went into liquidation on 15 January we have been working hard behind the scenes to ensure disruption to Paradise was kept to a minimum.

“Having Bam on board for the building along with remaining close to subcontractors and the supply chain means we are now able to move ahead with getting One Chamberlain Square completed as soon as we can.”

The building, which topped out in December last year, will be handed over to tenant PwC, who are acting as special managers in Carillion’s liquidation, in early 2019. Carillion originally won the £250m scheme back in summer 2016.