The team behind Birmingham’s £700m Paradise development has been forced to ask for additional funding after Carillion’s collapse contributed to an overspend that meant cash for infrastructure on phases one and two was spent on the first stage.

PCLP is a public private partnership between Argent as the developer manager, Hermes as the private investor and both Birmingham council and the LEP as public delivery partners. 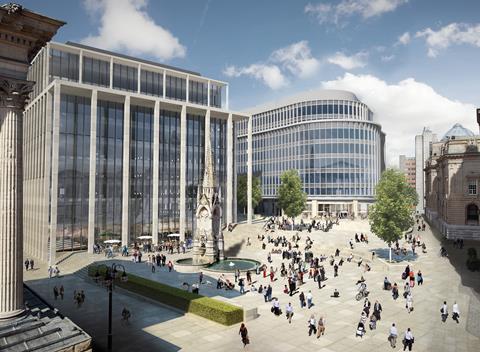 Phase one and two of Paradise in Birmingham

The council said the decision to spend phase one and two allocations on phase one, which was being built by Carillion before its collapse, was not communicated widely within the council or to the LEP.

It said the £29m phase one overspend included the first portion of Carillion's liquidation claim and additional infrastructure works.

PCLP is now seeking the extra funding to proceed with the second phase, which is being delivered by Bam, which also took over the first phase after Carillion went bust.

This would pay the £2.3m balance of Carillon’s liquidation claim and provide £17.2m for the cost of the compulsory purchase order [CPO] for the hotel freehold which also clears the area which will make up phase three of the scheme.

It will also provide £30m for infrastructure capital, including public realm projects.

A spokesperson for Paradise said: "Costs for infrastructure work for phase one of Paradise Birmingham have not increased by £50m or £100m, as incorrectly reported in the press.

"The increased scope of off-site works for phase one of Paradise, together with a combination of construction inflation and the collapse of Carillion, led to an increase in costs of £29m.

"Private sector funding is in place for our next building, one Centenary Way, and we are awaiting the outcome of the LEP’s considerations regarding a CPO and infrastructure costs relating to phase two.”

Details of the phase one overspend