Work is scheduled to start in February 2019 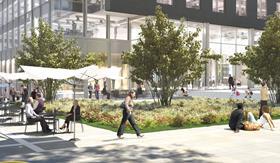 Wates has won a £150m contract to deliver two office buildings at a commercial-led development in Birmingham.

According to a contract award notice published to the Official Journal the contractor has been awarded the design and build contract for two office buildings in the Axis Square development, which is being brought forward by London and Continental Railways.

The two offices, One Axis Square and Four Axis Square, make up the first phase of the project, which was designed by Fletcher Priest Architects.

Wates beat two other firms to secure the job, which is expected to begin onsite in February 2019.

The first building is scheduled to be ready for occupation in April 2021.

Set between The Mailbox and the new Arena Central development, the site of Axis Square is currently dominated by a dated 1970s office block.

The development, which was granted planning permission in 2017, will include five buildings totalling 1 million ft2 of Grade-A office space. The office buildings will range from five to 23 storeys high.

The scheme will also feature a new public square with cafes, restaurants and retail opportunities at ground floor.