Battersea Power Station site shut until end of this month

Work on the Battersea Power Station redevelopment is not expected to restart for another four weeks because of the coronavirus outbreak, the developer’s chief executive has confirmed.

One of the country’s biggest redevelopments, the £9bn site was temporarily closed last week but in an update Battersea Power Station Development Company boss Simon Murphy said: “We have concluded that, in light of the government requirements and guidelines, the site should remain closed for the next few weeks.

“We will review the position again on 17 April and if deemed appropriate to reopen, main site works would recommence on 27 April.

“In this period the only people working on site will be our security team and a skeleton staff undertaking essential maintenance. Offsite works and design activity will continue where possible to ensure we are in the best possible position when we restart on site.”

Mace is carrying out work on the second phase of the scheme, estimated to be worth £1.15bn, and which involves work on the main grade II* listed power station itself. It will include retail and food space as well as an events venue and park.

It also involves building around 500,000ft2 of office space, with US tech giant Apple taking six floors for its new London campus.

Last spring, the developer said more than £2m a day was being spent on phase 2, with 2,000 workers on site. This phase, designed by lead architect Wilkinson Eyre, along with heritage advisor Purcell, is due to be finished by the end of this year.

Sir Robert McAlpine is carrying out work on phase three of the scheme which includes building more than 1,300 apartments designed by Foster + Partners and US practice Gehry Partners. This phase, estimated to be worth around £1bn, will also include a hotel, retail and restaurants. 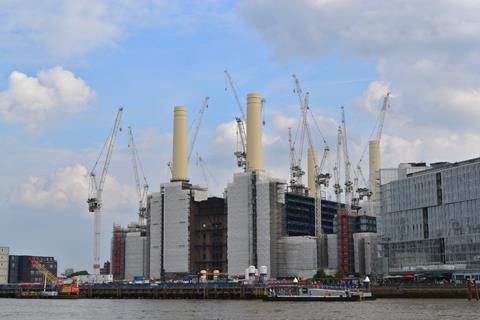