Help to Buy accounts for 23.8% of new reservations 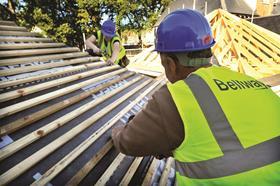 Bellway’s pre-tax profit has climbed 53% in its latest interim results.

Chief executive Ted Ayres said Help to Buy has been an “important initiative” for the housebuilder, and was used to secure almost a quarter of Bellway’s new reservations.

The group achieved an average of 139 reservations per week during the first half of the financial year (H1 2014: 137 per week).

Ayres said: “Customer demand for new homes has remained robust throughout the country.

“Reservations have held up particularly well given the strength of the comparator period, which benefitted from an initial surge in activity following the introduction of Help to Buy in April 2013.

“Help to Buy remains an important initiative for the housebuilding industry, supporting creditworthy customers to purchase a new home and this incentive has been used to secure 23.8% of reservations.

“Whilst there continues to be a gradual improvement in the availability of mortgages, Help to Buy remains the only widely accessible and cost effective option for those customers with a deposit of 5%.

“The pricing environment remains positive, however the rate of growth in selling prices has moderated. This creates a more sustainable outlook, especially in the London boroughs.”