A decision on whether the controversial Bishopsgate Goodsyard scheme gets the go-ahead is now expected to be taken by Boris Johnson’s successor after the mayor postponed a ruling he was due to give on the project this Monday.

Earlier this week, Johnson’s own planning officers said he should refuse permission for the scheme featuring towers by PLP.

Johnson was due to give a planning decision on Monday afternoon after he called the scheme in last year at the request of joint venture developers Hammerson and Ballymore. Tower Hamlets and Hackney councils – the local authorities where the scheme will be built – have already turned it down

The joint venture said the news to defer a decision now means that parts of the scheme will be re-designed.

A spokesman for the developers said: “We welcome the mayor’s decision to defer the public hearing, allowing us to continue to work with the GLA, the local community and the boroughs of Hackney and Tower Hamlets, to bring forward amended proposals to address the issues raised in the [GLA] report and ensure that the Goodsyard and its benefits helps fulfil the capital’s ambitions for long term growth.” 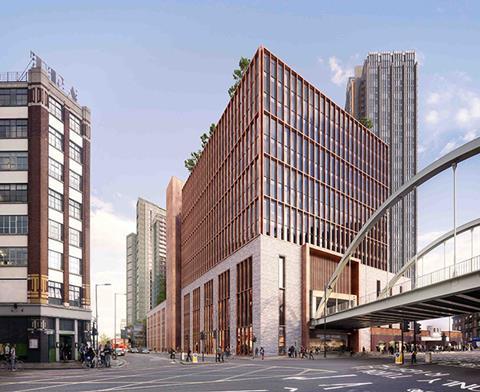 The scheme will include offices by Buckley Gray Yeoman

A local campiagn group opposed to the plans hailed the move and said the scheme needed to be redrawn completely.

A spokesman for More Light More Power said: “Hammerson and Ballymore should now go back to the drawing board to have any chance of creating something worthy of this significant site.

“We are looking to a new mayor to help get the Goodsyard scheme back to the drawing board and be the turning-point for a new vision that responds to the local economic, social and physical context of the site.”

On Monday, GLA planning officers said the scheme’s density, height, massing and layout were “not appropriate” and would affect the daylight of the local area near the northern side of the development that “could not be justified”.

Other reasons why the should development should be rejected, they said, included “substantial harm” to the former railway yard site’s heritage, caused by the proposed demolition of a wall connected to its Grade II-listed Oriel Gateway.

The joint venture spokesman added: “The development is strategically important for central London and despite the recommendation to refuse based on the amenity impacts and some specific heritage issues, we are pleased that the GLA recognises the significant public benefits offered.”

The proposal in the Shoreditch area of east London would provide up to 1,356 new homes and 65,000sq m of commercial space in 12 new buildings of up to 46 storeys in height, the tallest elements of which were designed by PLP.

The Goodsyard site has been largely derelict since a huge fire in the 1960s but in addition to the Oriel Gate it is home to the Grade II-listed Braithwaite Viaduct, due to be preserved in the proposal.