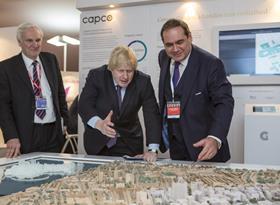 Boris Johnson has urged developers to sign a deal with City Hall to market homes in the capital to Londoners first, or least at the same time as to overseas buyers.

At the Mipim property conference in Cannes, France, the mayor of London launched a new Mayoral Concordat on housing development in the capital, signed by 50 large and small developers, aimed at ensuring new homes are marketed to Londoners first, rather than overseas.

The concordat builds on a commitment made by eleven major London housebuilders in December, initiated by the HBF, to end the marketing of new homes to overseas buyers before UK residents.

In a letter inviting developers to sign up to the concordat, Johnson said: “I do not in any way want to deter international investment … [but] I want Londoners to be able to live near where they work and to raise their families in our boroughs.

“This voluntary pledge recognises your commitment to market new homes first or first equal to Londoners.”

Stewart Baseley, HBF executive chairman, said the industry welcomed the mayor’s initiative, but added that foreign buyers remained crucial to the market. “Attracting up-front investment by pre-selling homes is absolutely key, and without it many developments would not go ahead,” he said.

“London has an acute housing crisis and foreign buyers are playing a vital part in helping increase the number of homes being built in the capital.

“However, the industry wants to ensure that UK buyers have every possible opportunity to buy the homes being built and signed a commitment last year to market in the UK at least at the same time as abroad.”

A spokesperson for Battersea Power Station Development Company - which sold all 866 homes for phase one off-plan in four days, in part thanks to a sales drive in the Far East - said: “We are signed up. It’s something we feel very strongly about and are very committed to.”

The spokesperson confirmed the 254 homes in phase two, on top of the Power Station itself, would be marketed to “Londoners only”.

Signatories to the Mayor’s Concordat include: