A host of big names including Mace, T&T, Sir Robert McAlpine and the V&A museum have all claimed titles at the 2021 Building Awards.

Mace claimed the Major Contractor of the Year Award along with the Diversity Award, while Turner & Townsend picked up a brace of prizes as well.

The firm, 60% of which is being bought by US giant CBRE for £960m, was named Construction Consultant of the Year (100 staff or over) and landed the International Project of the Year award too for its work on sportswear brand Adidas’s East Village Expansion at its North American HQ in the US city of Portland, Oregon. 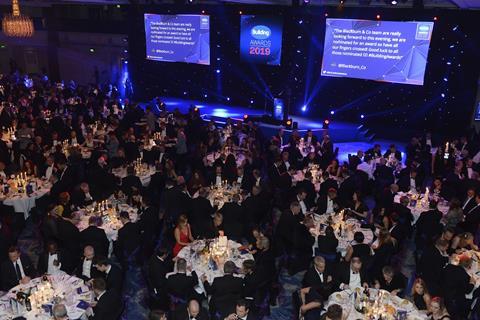 Hosted by comedian Jason Manford, the ceremony at the Grosvenor House hotel in London’s Mayfair tonight (2 November) was attended by 1,000 people who were able to congratulate the winners (full list below) in person for the first time since 2019.

Davies, who started at the contractor in spring 2019 and this year guided the firm to its first annual pre-tax profit in three years, was Building’s inaugural CEO of the Year, having won the 2016 prize when he was at the helm of Wates. For this year’s award, he beat T&T’s Vince Clancy, the winner in 2017, and Morgan Sindall’s John Morgan, who picked up the title the following year.

The CEO and Client of the Year prizes are chosen from shortlists compiled by the industry judging panel, with the V&A winning the client award.

Other winners included Sir Robert McAlpine, who won Building Magazine Project of the Year for its work on British Land’s 100 Liverpool Street building, and Berkeley which was named Housebuilder of the Year.