Design review approves of changes to the masterplan of the project 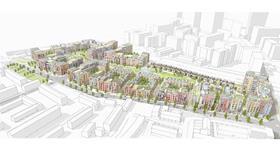 Cabe has given its blessing to the first legacy development on the London Olympic site, which it previously described as “weak”, after changes to the master plan were made.

In December 2012 Cabe said the proposed plan for the Chobham Farm development, designed by Pollard Thomas Edwards Architects, “set a poor precedent” for the Olympic legacy neighbourhoods and lacked “a level of richness” in the buildings.

However, in its latest design review, published last week, it said it approved the “variety in height, the use of set-backs and the articulation of individual plots and building façades”, which had been introduced.

The development will consist of 173 residential units and 1,162m2 of commercial space.

A decision on whether the development gets planning approval is set to be taken by the London Legacy Development Corporation later today.

Officials have recommended that it be approved.