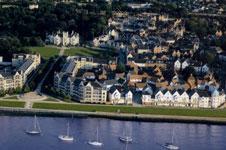 Developers, councils and government bodies are to be asked to sign up to a “design pact” to ensure high standards of design within the Thames Gateway, it was announced last week.

Cabe published a consultation on a design pact which would commit developers to adhere to certain design principles on issues including climate change adaption, placemaking and community cohesion.

In return government bodies and planning departments would commit to having in place good quality policies on all of the relevant issues. Cabe chief executive Richard Simmons told Building that ultimately he hoped the initiative would see developers rewarded by finding it easier to secure planning permissions. “My hope is that this will become a material consideration when councils deicde on planning applications.”

He added that the initiative could be a precursor to a nationwide roll out. For more details go to Cabe Thames Gateway