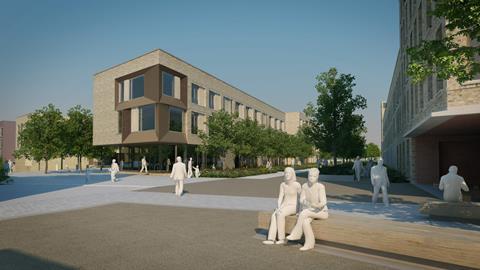 A student accommodation building at the University of Cambridge has been granted planning permission by local authorities.

The building, set to house 325 postgraduates, has been designed by RH Partnership.

Work on infrastructure will take place in 2014 and phased completions will begin from 2015.

Andrew Drummond, project associate from RH Partnership, said: “The last 18 months has seen an exciting and often challenging collaboration between the architectural, masterplanning and technical teams, working closely together to create an elegant extension to our city.”

The proposal includes a series of three to five storey buildings, as well as three open-sided courts and large amounts of cycle parking. The design is set to meet the BREEAM Excellent standard.

Roger Taylor, project director of the North West Cambridge Development, said: “These are the first buildings in Phase One that have received planning approval and they reflect the characteristics of the masterplan, which is to create a new, cohesive urban extension to Cambridge.”

The subsequent applications for the remainder of the first phase will continue to be determined throughout 2014.