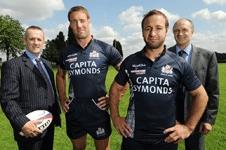 Consultant Capita Symonds will be the main sponsor for Bristol Rugby for the forthcoming 2009/10 season.

The firm has been involved with the club as official partner sponsor since 2004.

Capita employs around 150 people in two Bristol offices at Portishead and Clifton.

It has played a key role on a number of major projects in the area in recent years, including Merchants’ Academy, Cabot Circus, Oasis Academy Bristol, SS Great Britain and Bristol University.

The new sponsorship deal will see Capita branding on the home and away shirt and official Bristol Rugby merchandise, as well as on banners and signage at the Memorial Stadium.

Mark Norris, executive director, said: “We are delighted to continue our relationship with Bristol Rugby this season as Main Sponsor. We wish coach Paul Hull and his team all the best for their Championship and British & Irish Cup campaigns this season.”

The English Championship season kicks off on 6 September, with Bristol playing host to London Welsh.