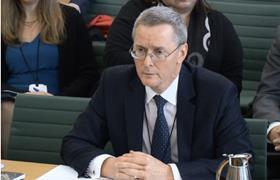 Carillion's former finance directors Zafar Khan and Richard Adam are likely to contest any disciplinary proceedings brought against them, the Financial Reporting Council has told MPs running the inquiry into the contractor's collapse.

In a letter to Frank Field and Rachel Reeves, who chair the joint committee inquiry, the FRC's chief executive Stephen Haddrill said while his organisation's investigation was ongoing, if sufficient evidence was found to bring disciplinary action against Adam (pictured) and Khan he expected it to be contested.

Haddrill wrote: "Once the investigations are complete, the FRC Executive Counsel will determine whether the legal threshold is met to bring disciplinary proceedings.

"As matters stand it should be expected that if proceedings are commenced, they will be contested. In those circumstances we cannot set a final date for the conclusion of enforcement action, not least because the proceedings take place before an independent tribunal, and it is the tribunal that will set the timetable."

Commenting on the response Reeves and Field highlighted the fact PwC and audit partner Steve Denison admitted misconduct and accepted substantial fines and non-financial sanctions in relation to the 2014 audits of stricken retailer BHS.

Haddrill said the FRC was committing resources to complete the investigative work as fast as possible and would continue to provide updates on the progress of the investigations given the "exceptional level of public interest in Carillion".

In their personal responses to the inquiry both Khan and Adam, along with all the Carillion directors bar Richard Howson, said while they disagreed with findings they felt it would be more appropriate to provide explanations to the investigations being carried out by regulators.

Reeves, who also chairs the business committee, said: “Carillion’s collapse was a corporate disaster and the architects of its failure were the company’s directors. As a PR exercise they weakly told the committee that they took responsibility for the company’s collapse but sought to blame everyone but themselves.

"Now, when given another opportunity to face up to the responsibilities for which they were so well remunerated, they again wriggle out of accepting culpability."