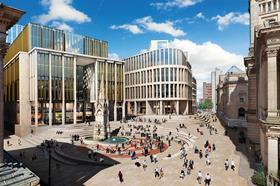 A £250m contract to build the first phase of the Paradise development in central Birmingham helped Carillion top both contractor tables for July.

The firm only won two contracts last month but shot to the top after bagging a deal from developer Argent to build the first phase of the regeneration scheme, formerly known as Paradise Circus. Carillion had been carrying out demolition and enabling works on the scheme, but has now been chosen to build One Chamberlain Square, the office block at the heart of the development.

Balfour Beatty comes next on the overall table after winning 30 contracts worth £227m last month, mainly in civils. The figure was boosted by a £140m deal with Heathrow for new baggage areas in terminals one, two and four at the airport.

Kier is second on the table without civils and third overall after picking up 50 contracts in July worth £168m, with work spread across commercial, housing and the public sector.

It was a good month too for ISG after its takeover by US investor Cathexis, as the contractor came third on the non-civils table, bagging £154m worth of deals – a haul helped by the £60m contract to fit out a building at Imperial College London’s White City campus. Morgan Sindall comes next with a contract haul totalling £117m spread across housing and commercial, followed by Buckingham Group, which won £104m worth of deals including a £66m contract to build a factory in Doncaster for Amazon.

Further down the table, contractor M+W, whose HQ is in Germany, has entered the top 10 for the first time this year after winning a £100m contract to build labs and offices in Hull for health and hygiene product manufacturer Reckitt Benckiser, which produces brands like Air Wick, Calgon and Clearasil.