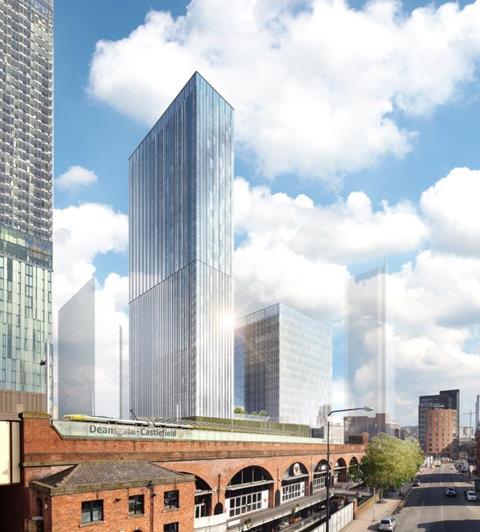 The plans, designed by SimpsonHaugh and Partners, comprise a 40-storey tower to house 350 apartments and a 14-storey building to provide 240,000 sq ft of office space.

The firm, which was acquired by stock exchange-listed contractor Carillion at the beginning of last year, will also deliver new retail and public realm to the area along Great Bridgewater Street.

The scheme will be delivered in partnership with Manchester City Council, Transport for Greater Manchester and Manchester Central.

At the launch of the scheme Ask Real Estate’s managing director John Hughes said:“Our scheme will be a visionary development, something which only a few years ago, would have been almost impossible to imagine happening outside of London.

“The huge levels of investment we have seen into Manchester’s infrastructure coupled with efforts by the Universities to attract and retain talent has seen an upturn in graduate retention and consequently an influx of businesses looking to establish themselves in the city centre.

“In turn this has driven demand for new hotels, retail and leisure outlets - the development of which has boosted the city’s economy. These factors mean it is now time for us to unlock previously hidden opportunities and the Bauer Millett showrooms is a strong example of this concept.”

Ian Simpson, founding partner of SimpsonHaugh and Partners added: “It’s about connecting a part of the city with the wider context. It will also be a great and public place which people will like and enjoy.”