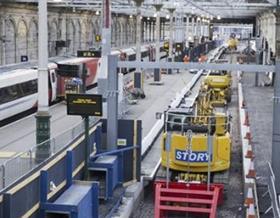 Network Rail has appointed Story Contracting to complete upgrades at Edinburgh Waverley station that were being carried out by Carillion before it went bust.

The Carlisle-based firm had been working as a subcontractor for Carillion on the £23m job.

The failed firm began work on the scheme, which will involve platform extensions, building refurbishments and installing walkways and escalators, early last year.

The work is being carried out in preparation for a fleet of new longer electric trains.

Carillion staff who had been working on the project are set to be transferred to Story.

A spokesperson for Story Contracting said: “We have been in discussion with former Carillion staff who are working on the scheme and Story are delighted that they have agreed to join our team as direct employees, bringing with them a wealth of experience and working knowledge of this prestigious project.”

The project is anticipated to last for 12 months, and is vital in the continued development of the station.

Yesterday, a spokesperson for the Official Receiver confirmed 10,125 Carillion jobs have been saved in the liquidation process.

But job losses have also continued to mount, with the number of jobs axed reaching 1,825.