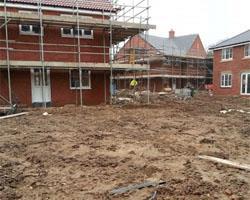 George Osborne has been urged to help small housebuilders by radically streamlining the planning system in next week’s Autumn Statement.

The Home Builders Federation called on the Chancellor of the Exchequer to use next Wednesday’s statement to remedy delays in the planning system by delivering implementable permissions more quickly.

In its submission for the statement, the HBF called on ministers to -

It also wants the government to take up Lyons’ recommendation that it should ensure councils are releasing smaller sites through the planning system in order to level the playing field for start-up and SME firms.

In addition, the HBF has urged the government to cut red tape on smaller developers when considering the impact of its Housing Standards Review.

The HBF blames the 78% fall in the number of developers building 100 units or fewer since 1988 on the increased regulations that house builders must comply with.

In its Autumn Statement submission HBF is also calling for Government to;

Stewart Baseley, executive chairman of the HBF, said: “We need to see more help given to smaller developers, whose numbers have collapsed in recent years due largely to rising planning and regulatory cost. If we are to build 200,000 plus homes a year, all parts of the industry need to deliver and we need more players on the pitch.”