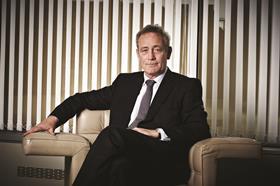 The chief executive of listed Shard steelwork contractor Severfield-Rowen, Tom Haughey, has stood down after cost overruns on the Cheesegrater tower.

The firm said in a stock exchange announcement this morning that “a change in leadership of Severfield-Rowen is required to re-establish confidence with all the group’s stakeholders”.

Chairman John Dodds will step in to run the firm as executive chairman on an interim basis. Haughey leaves with immediate effect.

Severfield-Rowen’s share price was down 35% in early trading to 77p, down from yesterday’s close of 120p.

This week Severfield-Rowen said cost overruns on the under-construction 48-storey Cheesegrater tower in the City of London had further impacted on its UK performance.

The firm said: “As a result, the Board intends to review expeditiously its current contract base and will provide a further update to the market, as soon as possible, when it has greater clarity on the financial impact of this exercise.”

A legal battle between Severfield-Rowen and fellow steelwork contractor Cleveland Bridge over delays and cost overruns on the Shard steelwork concluded last month.

The company said it is in discussions with its lending banks regarding compliance with its covenants.

The firm added: “The discussions with the company’s lending banks, and its other stakeholders, will continue with the objective of placing the Group on sound financial foundations that support its UK business and the further development of its Indian joint venture.”

John Dodds, executive chairman, said: “Severfield-Rowen is the UK’s market leader in structural steel and the development of its Indian activities is encouraging.

“Our order book remains stable, despite challenging current conditions, and the Board is confident that the longer term fundamentals of the Group are strong.

“I am, however, extremely disappointed in the need to make this latest trading update.

“My task, now, is to re-establish the credibility of the Group with all its stakeholders, bring greater control and discipline to its operations and secure Severfield-Rowen’s longer term financing.”