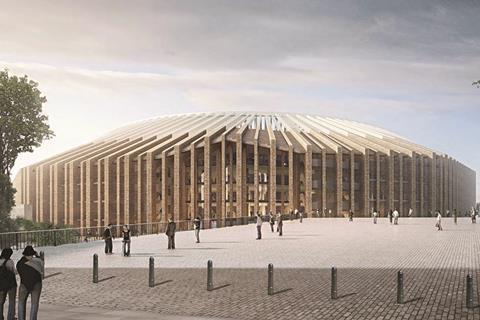 Premier league football club Chelsea has been told to provide more detail on how it will protect endangered bats and a historic cemetery during construction of its new £500m Stamford Bridge home.

Planners at Hammersmith and Fulham council have written to the club raising concerns about the effect of building work on bat hibernation and the nearby grade I-listed Brompton Cemetery. They said the club’s environmental statement was “inconclusive” about the impact of piling works on the cemetary’s catacombs - identified as a potential hibernation roost for bats.

Plans for the Herzog & de Meuron-designed redevelopment were sent in last November but, in its letter to the club’s strategic planner on the scheme, Aecom, the council said detail was lacking in many key areas, including the works timetable.

The council said: “[There is a] lack of detail and certainty over the phasing and demolition and construction programme. The council considers that for a project of this scale and complexity, it would be expected that a full chapter be devoted to this topic.” It added: “The council does not consider it acceptable to state that ‘the nature and duration of demolition and construction will be considered further as part of the next phase of design development’ given this is a detailed planned application.”

The council also wants more information on the impact of road closures as well as measures to mitigate noise, vibration and dust for local residents and businesses.

The club wants to increase the capacity of the ground from 41,600 to 60,000. It has hired Swiss practice Herzog & de Meuron to come up with a brick-clad design that is expected to use 6 million bricks.

Earls Court developer Capco has previously flagged up worries about the Chelsea scheme, writing to the council to raise concerns over a “lack of detail” from the football club on how it intends to build the venue.

Chelsea declined to comment. A Hammersmith & Fulham Council spokesperson said: “As part of the normal planning procedures, we had requested some further information from the developers.

“That has now been submitted to us and once we have gone through all information provided, there will be a further round of public consultation into the proposals.”