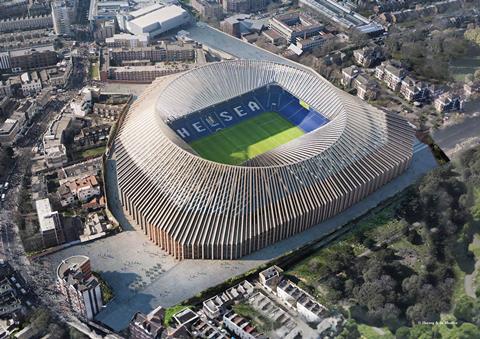 Chelsea Football Club has told Hammersmith and Fulham council that plans to transform its home in west London are under threat from a ’right to light’ challenge by a neighbouring property.

The club, via its lawyer Eversheds Sutherland, has applied to the council to request it exercise statutory powers under a Section 227, which if approved at a meeting on Monday could see the council acquire a part of the scheme in order to help fight off its objectors and push the scheme forward.

Lawyers Pinset Masons acting on behalf of the owners of a property on the other side of a railway line that runs between it and Chelsea’s current Stamford Bridge stadium, have gone to the High Court for an injunction against the planned revamp, primarily due to plans for a new East Stand which will cause a loss of light into the property.

A letter to the council from the law firm included in the documents also moots a re-design of the gothic-inspired plans by Swiss architect Herzog & de Meuron “so as not to cause the interference” or a “cut-back” of the East Stand.

But John Finlayson, head of planning regeneration at Hammersmith & Fulham council, has recommended the council approve the acquisition of the land to enable the club owned by billionaire Roman Abramovich to proceed with the scheme due to the “considerable public benefits” associated with it.

He said in his report to the council that Chelsea believe it is “highly unlikely that a private agreement will be reached” over the right to light issue with the property’s owners.

“Given the significant level of investment necessary, the club state that they will not be able to implement the development or secure any necessary development financing whilst there remains a risk that the existing injunctive proceedings might succeed,” he added.

Pinset Masons said the owners of the property will “take all legal action available to them” if the council decide to acquire the land.

This latest challenge to the big spending Premier League club’s redevelopment of Stamford Bridge into a 60,000-seater stadium follows an unsuccessful application for a judicial review of the council’s approval of the plans last July after it was rubber-stamped by London mayor Sadiq Khan at the end of March.

Prior to planning approval, Building revealed in 2016 that Chelsea had been reprimanded by planners for failing to provide adequate detail on the protection of bats in nearby grade I-listed Brompton Cemetery.

The club subsequently proposed restricted lighting, noise-muffling hoardings and site talks for builders on what to do if they encounter bats as some of the measures to protect the area’s endangered mammals.

The project team on the scheme includes Arcadis as cost manager, WSP and Schlaich Bergermann providing engineering services, while WSP is also providing transport consultancy and Aecom is the strategic planner. The scheme’s “gothic skin” facade is being engineered by Eckersley O’Callaghan.