Consultant Thomas & Adamson has said it expects at least half of a planned £5m hike in turnover in the coming five years to be from its London arm.

The 160-strong business currently has around £15m of income but senior partner Alastair Wallace has just completed a business plan which he says will see the London arm more than double its income from its current £2m.

Wallace presented the plan to the firm’s eight partners at its Edinburgh base last week and told Building he was looking at getting up to annual revenues of £20m over the next five years and growing its UK staff number by half.

The firm has another Scottish office in Glasgow with its London base in Haymarket, where 20 people work. Wallace said: “We have around 100 staff in the UK at the moment but I think that will be 150 and the bulk of that will be in London.” He added that its project management and QS work will spearhead the push in the capital.

He added: “In terms of revenue, I’d like to think £2m-£3m of the extra £5m will come from London. If not, we’re doing something wrong.”

Wallace said the new plan will kick in next February – just  weeks before the UK leaves the EU.

He said: “Brexit will have an impact, the markets will react to it and there will be a slowdown. But the impact in London will be significantly less than in the regions and that includes Scotland. Being strong in London allows us to strengthen the business elsewhere.”

Schemes it is working on in the capital include the Greenwich Millennium Village for Taylor Wimpey and a gene therapy scheme at Moorfields Eye Hospital near Old Street for US specialist MeiraGTx.

The firm works for developers Hammerson and British Land outside the capital where its schemes for latter include the Glasgow Fort shopping centre.

The firm also has offices in Dubai and Abu Dhabi, where it completed work earlier this year on a memorial for the founder of the UAE, as well as in Portland in Oregon where it carries out work on the US’s west coast for firms such as tech giants Intel and Microsoft.

Thomas & Adamson is also working for the European Bank of Reconstruction and Development at the site of the Chernobyl nuclear reactor which blew up in 1986.

The firm, which has an office in Kiev, is providing budget and risk management advice on the scheme to enclose the reactor in a giant concrete arch with the work being carried out by a joint venture of Vinci and Bouygues. An interim spent fuel storage facility is also being built at the site by US firm Holtec. 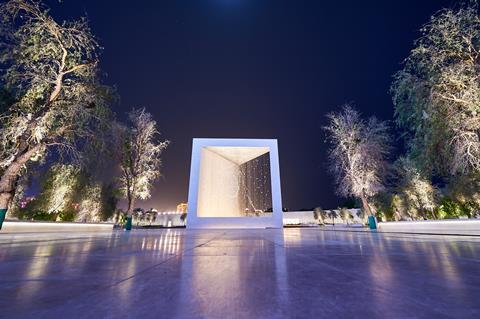