Pete Redfern adds he took an ‘honest decision’ to close sites, despite financial impact on business

Taylor Wimpey chief executive Pete Redfern said he stands by his decision to shut all Taylor Wimpey construction sites, taken a year ago last week, despite the dramatic impact on the firm’s 2020 results.

In an interview with Building’s sister title Housing Today, Redfern revealed how Taylor Wimpey agreed the move at a management meeting convened within half an hour of prime minister Boris Johnson ordering a national lockdown on 23 March last year. 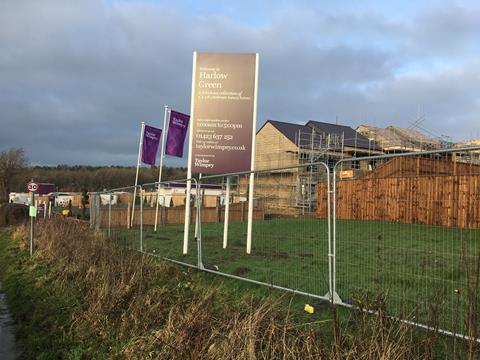 The housebuilder became the first to declare it was going to shut all its sites – contractor Multiplex said it was doing the same thing on the night of Johnson’s address – a move which was followed by all other listed firms, bar Berkeley Group, in the days that followed.

Redfern revealed Taylor Wimpey took the decision despite knowing the government was happy for construction sites to remain open, as long as they could operate in a safe manner.

But the top-three housebuilder has paid the price financially for the move, reporting a drop in profit of more than two thirds for the 2020 calendar year, after completions fell by nearly 40% to less than 10,000 homes.

> Housing Today interview: We were right to shut down so we could come back safer

He said: “It was clear that it would have been next to impossible for us, with the nature of construction sites, with a subcontractor and a self-employed workforce, to just click our fingers and operate a new set of covid rules, while people were going on with their day jobs. We didn’t know what the new rules should be or were.

“Pulling off, so we could come back safely later, still feels like the right answer.”

Redfern said the “momentous” decision was taken in the knowledge that financial targets for 2020 were going to be missed, because it was the “right thing” to do.

He said: “We all watched the announcement, looked at the statistics, listened to the message underneath it. It may seem cheesy but it is what it is. At those points, you just have to take […] an honest decision based on your principles.”

He said he did not regret the call, which was followed by a series of initiatives designed to tackle the fall-out from the covid crisis, including furloughing staff, cuts to boardroom pay, assistance for supply chains and making the firm’s safe site working protocols public for other firms to copy.

Asked about the superior financial performance of Persimmon last year, which shut sites but kept staff working, enabling it to ramp up production more quickly in the aftermath of the lockdown, he said: “I’m really comfortable with the decisions we took being in line with our values, even if it may have impacted on our financial performance.”

Click here to read the first half of Housing Today’s interview with Pete Redfern. The second half – covering the recovery period from lockdown – will be published later this week.