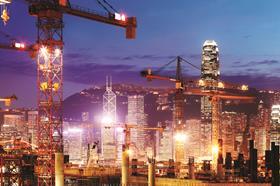 Chinese property giant Evergrande has signed an agreement with the BRE to advise it on a £200m green retrofit programme across its property portfolio, one of a raft of major commercial deals between the UK and China planned for this week to coincide with the state visit of Chinese premier Xi Jinping.

Evergrande, China’s second-largest property developer, has signed a joint partnership with the BRE and Tsinghua University - the Chinese equivalent of the BRE - to help it retrofit its properties to the BREEAM international energy efficiency standard and the Chinese national standard, 3-Star.

The programme will be worth £20m to the BRE.

Under the Evergrande deal with the BRE and Tsinghua University, one of the main focuses will be aligning the BREEAM international and 3-Star national energy efficiency standards.

Tsinghua University currently provides the technical advice on the 3-Star standard for the Chinese ministry of housing and urban affairs.

The deal will also include advising on the creation of an “eco-city” in Danzhou, in Hainan Province, which will trial new green materials and low-carbon technologies and the development of an international green demonstration park, also in Hainan Province.

Speaking to Building, the director of BRE China, Jaya Skandamoorthy, said the agreement could open up opportunities for British firms in China by aligning the BREEAM and Chinese energy efficiency standards.

He said: “What we hope to do is unlock opportunities for British firms like consultants and architects to promote their products and services, so they can meet both international standards and China’s 3-Star standards.

“There’ll be a lot of opportunities for British design firms that can design to BREEAM international standards.”

He added that there would be opportunities for over 100 architects and designers that can design to the BREEAM standard on a forthcoming £10bn project in China, with details to follow.

Skandamoorthy said the “unprecedented” research agreement was a two-way exchange of information which will see the BRE and Tsinghua collaborate on research and development.

He said: “From China’s perspective, they’ve got a fair bit of work to do to catch up and they know that. We hope we can help them make that leap to catch up with international best practice, and then go beyond that.”

The agreement is designed to help China meet its national green building and low-carbon urbanisation targets, which are a key part of its 13th five-year plan.

As Building went to press: