Architect leaves office it had hoped to rebuild 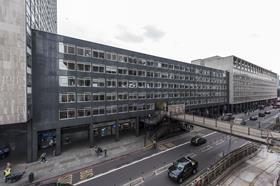 David Chipperfield Architects has left the Waterloo office it moved into seven years ago when it won the job of replacing the 1960s building.

The practice was shunted off the project last year when Elizabeth House was acquired by a new owner who expressed doubts at some elements of DCA’s design and promptly launched a new competition.

This was won by AHMM which put its new proposals out to consultation this summer. A planning application for the highly contested site next to Waterloo station is expected imminently. AHMM is the third architect to work on the site this decade.

Chipperfield has now moved across the Thames to premises just off the Strand at Aldwych. The office, on Surrey Street, is next to Kings College and the remains of a Roman bath.

The Elizabeth House scheme is being redeveloped by Slovakian developer HB Reavis.