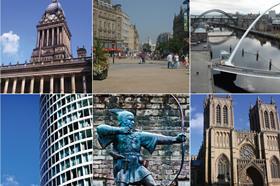 Six of England’s largest cities have agreed new deals with Whitehall that will see town halls given greater control over central government spending in order to direct capital investment where it is most needed.

These Economic Investment Funds will also enable the city regions to pool business rates revenue across their local authority areas, eventually leading to the creation of revolving investment funds to support infrastructure and business.

The bespoke deals, which follow earlier agreement with Greater Manchester and Liverpool, will also give the cities new tax increment financing powers – a long-called for financial tool that enables the cities to borrow against future growth in business rates within a designated area and use the finance to invest in urban development and infrastructure.

These deals give cities the power to stimulate private sector growth

The deals also see the creation of joint investment programmes aimed at bringing together all public assets across the area to rationalise the public estate and unlock land for development.

Other elements include more powers over transport, including local and regional rail services, and new funding models to boost skills and reduce unemployment.

Sheffield and Leeds city regions are set to follow the Greater Manchester city region in putting in place a combined authority, which will bring the constituent councils of each city region together into a statutory governing body, enabling them to pool sovereignty and resources.

Rhian Kelly, CBI director for business environment, said: “These deals will give our cities real powers and resources which, if implemented well, will help them to stimulate private sector growth.

“Giving cities greater financial freedom will help them encourage investment in critical infrastructure, particularly through tax increment financing schemes. The ability to pool disparate funding streams and take control of transport budgets will enable them to take a more strategic view and help to align resources with local priorities.”

But the deals fall short of that agreed by Greater Manchester, unveiled in the Budget in March, which will see the city region share in some of the national tax growth – not just business rates - generated by economic development, through an “earn back” financial mechanism agreed with the Treasury.

Tony Travers, director of the Greater London Group at the London School of Economics, said changes brought about through the deals were “limited” and that “proper decentralisation within England remains a long way off”.

“Ministers and civil servants are most unwilling to cede power, however convincing the case,” he added.