Plans to tear down 1-2 Broadgate in the City of London and replace it with a 14-storey office and retail scheme by AHMM are being backed by City planners.

The office and retail scheme will be built by Sir Robert McAlpine and has a construction value of around £300m. Work is set to start next year.

Developer British Land last year secured a five-year certificate of immunity from listing for the 1980s blocks, designed by an Arup team led by Peter Foggo.

The C20 Society had argued that the proposed redevelopment would harm the setting of the adjacent 1 Finsbury Avenue, also by Foggo, which is grade II listed.

But planning officers said in a report ahead of next week’s planning committee meeting: “The replacement building is of a convincing and high-quality design, offering significant wider public benefits.”

The City’s planning committee is due to discuss the proposals next Tuesday. 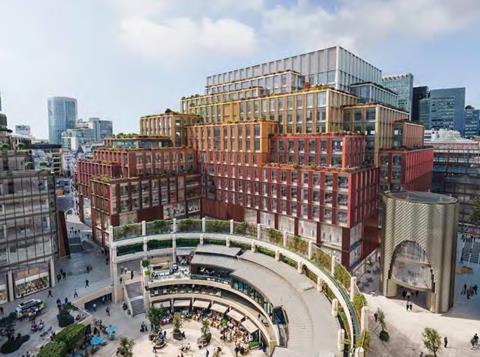