After a marginal rise in shares and then decline, Taylor Wimpey’s sale meets with ambiguity from analysts

We all knew Taylor Wimpey was going to sell its North American arm, so when the announcement came last Thursday, its shares didn’t so much fly of the chart as nudge slightly upwards. But their decline since then in part reflects the ambiguity of analysts towards the selling off of one of the most profitable parts of the housebuilder’s empire.

“It’s punched an enormous hole into profitability,” said Robin Hardy, an analyst at Peel Hunt. The £595m sale of the US and Canadian businesses to TMM Holdings, a partnership of US investment funds, robs the company of one of its crown jewels, he said: “It’s selling the [part of the business with the] highest return and the one with the best recovery prospects.” The housebuilder can now pay down most of its £654m debt, but the interest payment savings, which he estimates will be about £17m-19m a year, are no match for the £93.8m in profits the American arm generated last year.

Yet other analysts think Taylor Wimpey will now be able to focus on its UK operation without distractions from over the Atlantic. “Splitting
the management team between the UK and US meant the business wasn’t properly focused,” said Rachel Waring, an analyst at Panmure Gordon. “I would imagine it will be more aggressive in buying land.” The price was also good one: “It’s a positive move. They have achieved what looks like a very good price”, said Waring. Kevin Cammack, an analyst at Cenkos, believes the share price could hit 50p in the next 12-18 months. Its current position is 41p.

Still, there are mutterings from analysts that the banks that are currently bankrolling Taylor Wimpey pressured the firm to sell up in the US. “If they hadn’t sold the US and Canadian business then the debt funding would have run out by 2012,” said one source. The firm is now a simpler one. But one with better returns? Analysts are unsure. 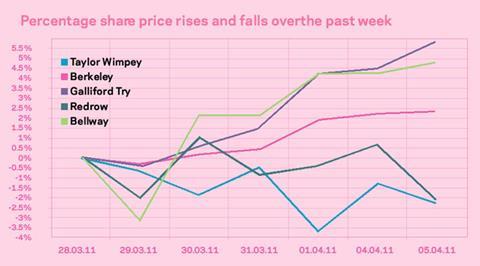