The team drafted in to complete the Liverpool hospital left in the lurch by Carillion’s collapse last year is still trying to work out how to fix defective cladding at the half-built scheme.

A review carried out by Arup last September uncovered cladding and structural issues at the new Royal Liverpool hospital (pictured).

It found that cladding fitted did not meet building regulations. 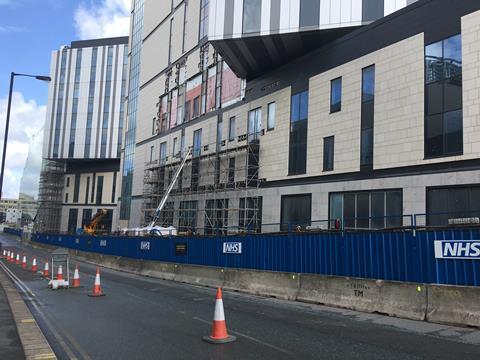 Now the Liverpool University Hospital NHS Foundation Trust, which is the client on the project, has admitted work is still ongoing to find out how to rectify the problem.

Trust chief executive Steve Warburton said a progress report sent to it by project manager Gleeds said work “was progressing well, although a solution for the external cladding is still being worked through with specialist advisors”.

In papers published ahead of tomorrow’s (Tuesday) meeting of the trust board, Warburton also revealed it wanted an updated risk register to be presented to the next meeting, which is scheduled for 28 January next year. This is expected to look in detail at issues that could give the trust future problems including how much the scheme will cost to finish off and when it will be completed.

The government has not yet signed off the hospital’s business case and the upcoming general election has delayed this even further.

A report into the government’s handling of its response into completing the Royal Liverpool and another Carillion scheme, the Midland Met hospital, has also been delayed.

It is being put together by the National Audit Office and is now scheduled to be published in early 2020.