But unemployment is still 44% higher than 12 months ago

Construction was one of only two sectors to see an increase in year-on-year vacancies in the final quarter of last year, according to new ONS figures.

There were 2,000 more construction jobs available in the three months to December 2020 compared to a year before, an increase of 8.3% on the same period in 2019.

The only other sector to see an increase in vacancies across the same period was public administration and defence and compulsory social security, which had around 1,000 more jobs up for grabs in the final quarter last year, up 4.7% on the final quarter of 2019.

It comes following new data published by the ONS which showed that unemployment across the wider economy rose to 5% from 4.9% in the three months to November last year.

Some 1.72 million were out of work across all sectors, the highest level in five years, with 418,000 more than in the same period in 2019 – the sharpest increase since late 2009 during the financial crisis. 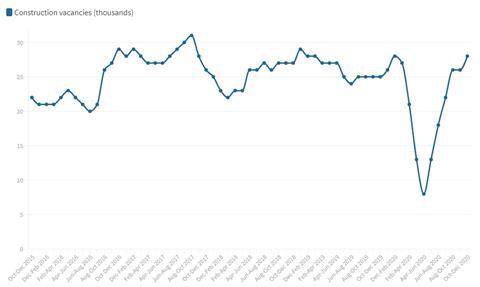 Reacting to the figures, Owen Goodhead, chief operating officer at HR consultancy Randstad, said construction “continues to demonstrate its resilience, establishing itself as one of the bright spots of the economy”.

Construction vacancies stood at 28,000 in the final three months of last year, the highest number since the three months to February on the eve of the covid-19 pandemic.

Aside from a standstill in late summer and early autumn, vacancies have grown steadily from a low point of 8,000 in the three months to June last year and appear to be on a course to hit 30,000 for the first time since the three months to October 2017.

But the imposition of a third national lockdown earlier this month could potentially buck the trend.

And despite the impressive year-on-year figures, construction’s quarter-on-quarter increase in vacancies at the end of last year lagged behind several other sectors.

There were 6,000 more construction jobs available in the last three months of 2020 compared to the previous quarter, an increase of 25%.

And unemployment in construction is still far higher than it was a year ago, with non-seasonally adjusted ONS figures showing that unemployment in the sector was at 73,000 in the three months to November last year compared to 51,000 in the same period in 2019, an increase of over 44%.