Construction sites around the country have been hit by more than 6,000 break-ins in a single year, a new study has revealed 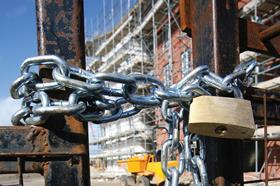 The report by secure storage unit supplier Mobile Mini was compiled from data obtained through Freedom of Information (FOI) requests sent to 27 police forces around the UK.

Using the data, the study estimates there were more than 6,000 separate instances of thieves gaining entry to construction sites and illegally taking tools, materials and plant equipment between September 2012 and September 2013, but warns the figure may be significantly higher.

The report also reveals that thieves used force - such as breaking windows, cutting padlocks or compromising perimeter fences - in around 35% of incidents.

A further 5% of incidents involved “legitimate access”, where thieves used a key, or turned up to a busy site and took equipment unnoticed.

In a further 21% of incidents sites were simply left unsecured, or were protected only by a fence that was easily scaled by intruders.

Commonly stolen items included materials, such as lead and copper piping, and power tools like saws, drills and jackhammers.

Plant equipment, such as cement mixers, diggers and excavators, were also frequent targets of theft, suggesting that many criminals arrive equipped with trucks or vans to transport bulkier items.

Personal items, such as laptops and mobile phones left by staff, were also stolen.

The study also revealed particular theft hotspots, with sites in Devon & Cornwall hit by 372 separate incidents over the course of the year, with police in Derbyshire recording241 cases and Thames Valley recording 218.

The study cautions that due to the different ways data is recorded in different areas it is not possible to absolutely determine whether the total number of incidents recorded by a police force reflected individual items stolen, or separate break-ins.

However, it says a sample of the clearest data suggests there were 5,772 break-ins nationwide over the course of the year, although the true figure may be significantly higher.

Ron Halchishak, managing director at Mobile Mini, said: “We were surprised to see that as many as one-fifth of thefts were due to a lack of on-site security and this should act as a wake-up call to many in the industry.

“The FOI data revealed that criminals are all too prepared to force their way into a secured site too. Construction site managers should give careful consideration to their security arrangements and make life as difficult as possible for Britain’s construction site thieves.”

For more details on the theft data, click here