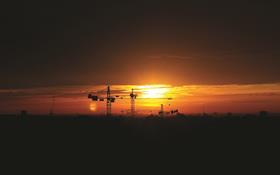 A number of unsuccessful bidders for a £750m public sector consultants’ framework are considering mounting legal challenges against the award, Building has learned.

Potential grounds for a challenge cited included UK SBS’ system for judging bidders on pricing criteria and the fact no small and medium enterprises (SMEs) won places on the UK lots.

The latter came despite UK SBS briefing bidders during the tender process they had structured the framework to attract and enable SME participants in order to fit in with the coalition government’s policy to increase its use of SME suppliers.

UK SBS said it was unable to comment during the 10-day standstill period.

Winners are expected to be publicly confirmed on 23 June, but a source close to the process said the date could slip if challenges are mounted.

Capita, Jacobs, Mace, Pick Everard and Mott MacDonald were among the big winners, landing spots on at least four of the five framework lots.

According to the UK SBS’ scorecards for the UK winners (see below), Gleeds ranked top in terms of total score on three of the four lots, while Mace topped the fourth lot.

A number of major consultants missed out on all four UK lots, including Turner & Townsend, Rider Levett Bucknall, Aecom, Ridge, Mouchel and Gardiner & Theobald - all of which were on the previous four-year iteration of this framework, which only covered the UK.

The framework has been dogged by controversy. It is due to go live this month, over a year later than the government intended, after delays due to a prolonged consultation period, alterations to the framework requirements and more than 400 tender clarifications in the weeks leading up to bids being submitted. 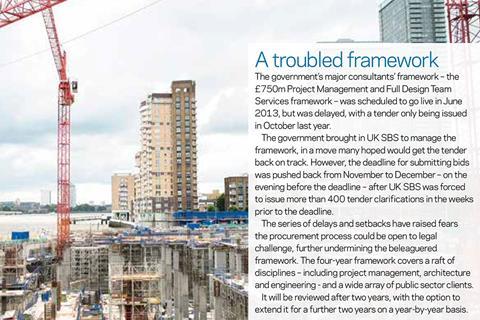 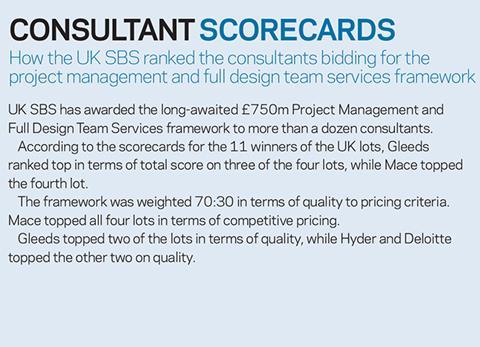 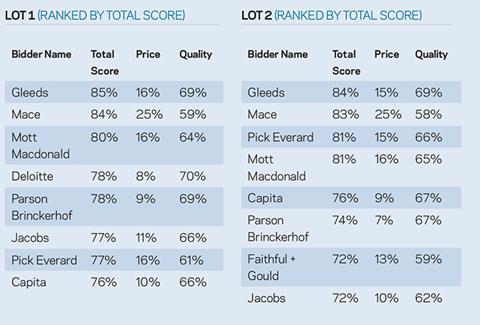 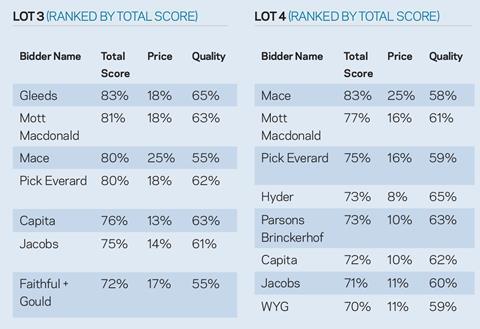