Work set to start this week on massive mixed-use development 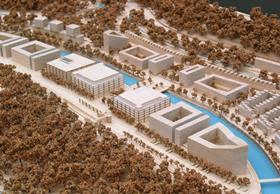 Contractor I & H Brown has won the contract to deliver the first phase of the £400m mixed-use Kirkstall Forge development (pictured) in Leeds.

Commercial Estates Group (CEG) has announced that work would begin this week on the 23-hectare site, with I & H Brown appointed to build the development’s initial infrastructure. C Spencer has been appointed to construct the new railway station and is expected to begin on site in early 2015.

The first phase of the work will include a new railway station, access road and service site. Once complete by late summer 2015 it will allow the construction of 1,000 new homes and 300,000sqft of commercial space including restaurants and shops.

CEG has already completed the demolition and remediation for the site.

The site near central Leeds will be served by two new rail stations on the Airedale line, at Kirkstall Forge and Apperley Bridge, which will provide two trains per hour into Leeds city centre.

Jon Kenny, director of CEG, said the project was “one of the most ambitious schemes in Leeds’ development pipeline”.

He added: “We have ensured that something very special and unique can be delivered at Kirkstall Forge; this sustainable travel offer and the quality of the new amenities and stunning riverside location will undoubtedly make it one of the most sought-after destinations in the north for both businesses and residents.”

Rachel Reeves, MP for Leeds West, said: “Kirkstall Forge is set to stimulate the local economy and will ultimately be a catalyst for major regeneration, much-needed housing delivery and job creation on a brownfield site.”

Approximately 2,400 jobs are expected to be created during the building programme and CEG has pledged to invest £10m in affordable housing, education and transport improvements for the scheme.