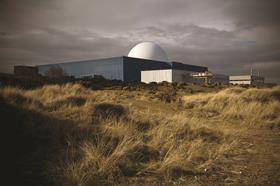 Contractor Energy Solutions has said the winning bid for a £7bn nuclear decommissioning job that went to a Babcock-led team should have been “excluded” from the bidding process and is claiming up to £200m in damages after losing out in the race for the job.

Energy Solutions, which was in a partnership with Bechtel called Reactor Site Solutions (RSS), lost in its bid to run the Magnox and Reactor Site Restoration portfolio of decommissioning sites in March, one of the biggest jobs in the UK construction market.

Energy Solutions was the incumbent bidder but was beaten to the 14-year long job by a consortium comprising Babcock subsidiary Cavendish Nuclear and US engineer Fluor, called the Cavendish Fluor Partnership (CFP).

Energy Solutions - without bidding partner Bechtel - is now claiming up to £200m in damages from the Nuclear Decommissioning Authority (NDA), which awarded the contract.

In papers filed at the High Court, seen by Building, Energy Solutions claimed there were “serious and legitimate concerns” about how the procurement race was run and that it had lost out on £100m of profit that it would have made on the job.

The firm also claimed it had spent £10m bidding for the job and incurred £8m in redundancy costs because of the loss of the contract, all of which it said should be reimbursed by the NDA.

It said it may increase its claim in the future because it had “further lost reputation and good will and, as a consequence, the opportunity to earn profits on contracts of a similar size and nature for which it would have successfully competed as a result of winning the contract”.Building understands that as a result the total claim could rise to £200m.

Energy Solutions said it was notified in March that, following a bidding process that involved around 200 meetings with the NDA, its team had scored 85.42% while the winning bidder scored 86.48%.

But the firm said it had “serious concerns” that an “accidental error” in scoring Energy Solutions’ bid identified by the NDA’s legal advisors meant its score had been upgraded to 85.42% near the end of the bidding process.

“In the context of an evaluation where the scores were already close, the existence of such a significant error required considerably more explanation and investigation than apparently took place,” the court papers state.

Energy Solutions claimed its tender was not scored correctly, resulting in a lower score than it should have received.

It also claimed the winning bidder’s tender did not meet a number of required criteria and should have been “excluded from further consideration”.

A spokesperson for the NDA said it “did not accept” Energy Solutions’ claims.

She added: “The NDA is confident that its procurement process, including the evaluation, complied fully with EU and UK regulations at all stages and is well prepared to present its case in court.”