Contractor margins should be set at 5% on public sector jobs, says Scape boss 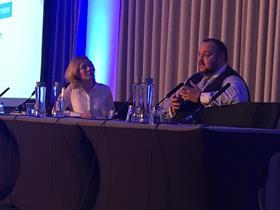 The boss of public procurement specialist Scape says government should set margins at 5% for all projects procured by the public sector.

Addressing Building Live, Scape chief executive Mark Robinson (pictured), who also said Scape’s next major projects programme would be worth more than £7bn, said there was no reason margins on public sector jobs could not be mandated.

He said: “I think that margins should be set across the industry particularly on public sector projects.

“Why don’t we agree on a 5% margin on every project? Every contractor will know they are going to get a 5% margin, they can invest in the resources and the teams and then they can make sure the projects are delivered on time and on budget.

“It also means they can focus on quality not on trying to claim back money, which they spend thousands of pounds on.”

“The point is that by capping it you are ensuring quality as you are earning the same amount on each job and the focus isn’t on profit, that’s already locked in.”

While saying that many main contractors were operating on a “rubbish” business model, Robinson threw some blame for the current lowest price environment on to public sector, saying they were partly responsible for driving down contractor margins.

He said: “My opinion is that it is poor procurement practice. If you’re getting a contractor to come and deliver a project and they’re doing it at really low margins, even some negative margins, that is poor, poor procurement.”

Robinson, who added Scape will be re-procuring a number of frameworks over the next few years, said he was both currently having and actively planning to have discussions with government about how mandated margins could work.