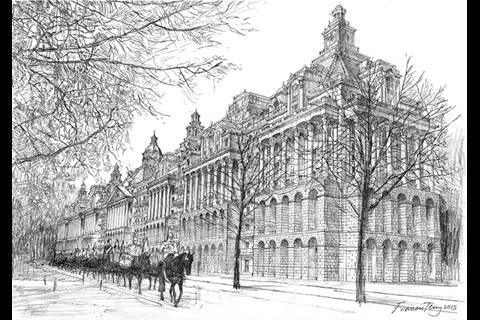 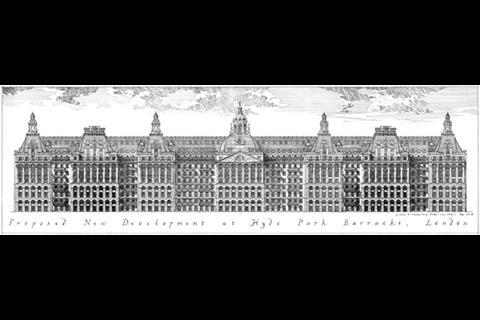 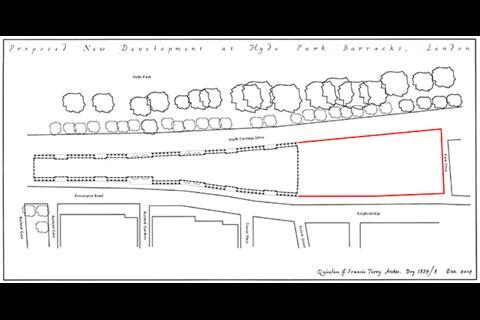 Hyde Park Barracks replacement - site plan by Francis Terry. The red line shows where the new barracks would be sited, with the residential to the left 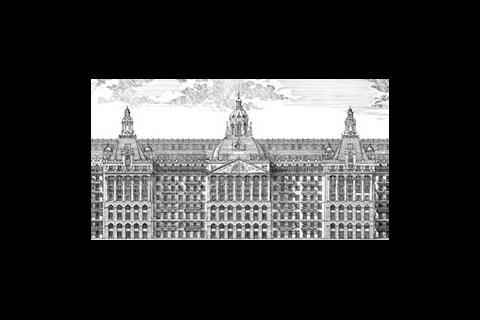 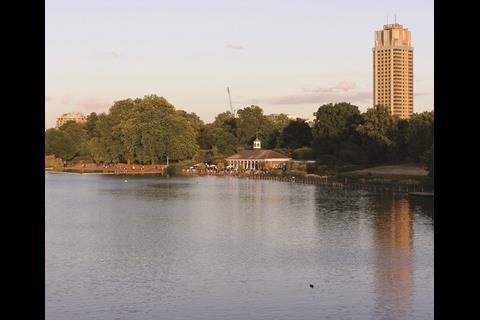 One of the candidates vying to redevelop London’s Hyde Park Barracks with a high-end residential scheme has named a number of contractors he is keen to work with on the project.

Former banker Bruce Rippon is behind proposals to replace the Sir Basil Spence-designed barracks with a classical French-style apartment building designed by architect Francis Terry, along with a new barracks.

Rippon said his firm, SD&B International, was “ready to rock and roll” with the project but was waiting for the Ministry of Defence to make the next move on the sale, which is expected to net at least £650m.

He said Sir Robert McAlpine, Ardmore and Mace would be among SD&B’s preferred contractors.

“For example Ardmore, who built the Corinthia Hotel, have a particular talent to build classical architecture,” he said.

But Rippon stressed there were many contractor opportunities on the project.

“Tenders would be going out to three or four parties for each part. We wouldn’t just use one contractor for the whole thing.

“It would be a formal process. They would all have to tender and come up with decent ideas and then we’d get them in a board room and decide who we thought we could work well with.

“We would want a blue-chip firm, it goes without saying.”

Rippon is believed to be among 20 developers keen to win the barracks redevelopment job.

Last week it emerged Dixon Jones has been hired by the property developer Cheval to design a rival mixed-use proposal backed by money from Dubai. The practice replaced Rogers Stirk Harbour on the stalled Chelsea Barracks development.

Rippon said he wasn’t intimidated by reports of 20 rivals, dismissing them as “the usual suspects circling”.

“We’ve got a world-class team and we’re the only party to come up with a credible proposal or design,” he said.

Rippon anticipates that hiring “one of the world’s greatest architects” to design the interiors of the new residential building, with the design team working under Quinlan and Francis Terry’s QFT practice.

A version of this story was originally published by Building’s sister title BD. It can be viewed here.