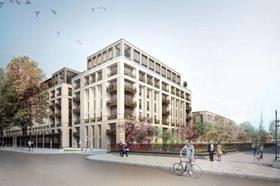 EC Harris is cost consultant, Arup is engineer and Atelier Ten is M&E consultant, according to Barbour ABI.

Qatari Diar bought the site from the Ministry of Defence for nearly £1bn in 2007 and first launched its plans the following year. But the developer was forced o rework its plans in 2009 after facing opposition, including from the Prince of Wales who called the scheme “a gigantic experiment with the very soul of our capital city”.

Qatari Diar won outline planning permission at the end of 2011 for 448 residential units, a sport centre, retail, health centre and other leisure uses.