More contractors have been spelling out the measures they have been introducing to make sure their sites continue to remain up and running.

Yesterday, construction leaders wrote to the prime minister and chancellor urging them to do everything they can to keep sites open for as long as possible – or face having to bail out the industry on an unprecedented scale. 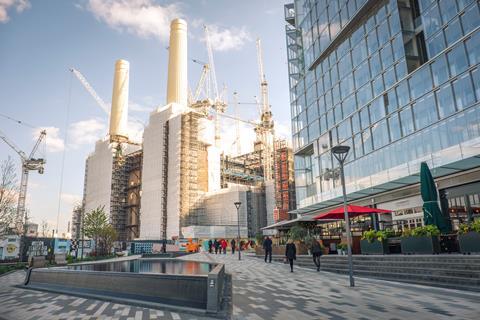 Mace is working on the Battersea Power Station redevelopment

Mace chief executive Mark Reynolds told Building that having to shut all its 90 sites in the UK because of the coronavirus crisis would cost it £10m a week – five times the amount it had budgeted for over a no-deal Brexit.

The country’s largest contractor Laing O’Rourke said “we have taken steps to minimise the number of people [on sites] in any location to complete work safely and be productive”.

And Bam, whose jobs include a new headquarters building for Facebook at Argent’s King’s Cross site, said staff who work in offices have been asked not work on sites.

A spokesperson added: “Our approach is to investigate the specific risks for each project, working closely with clients and our supply chain to identify and validate potential solutions which could include pre-ordering materials, changing the programme, and changing how client meetings are held.”

Vinci, which is working on a £150m cancer centre in Manchester, said it was introducing different shift patterns.

A spokesperson added: “Each contract and project is being assessed and we are in constant liaison with our client teams and our supply chain partners to make sure we balance the need to deliver our contracts with the requirements to reduce personal contact. Right now, there are no plans to close any sites.”

The firm, which is headquartered in Paris, added that it had cancelled a senior management conference scheduled for the end of the month.

Meanwhile, a Balfour Beatty site across the Atlantic has not been caught up in a city-wide shutdown of jobs in Boston by its mayor Marty Walsh.

Nearly 100 sites will be mothballed until the end of March and it was thought Balfour’s scheme to build a $1bn Green Line rail extension to Boston’s wider rail network was at risk.

But a site source said: “The construction shutdown does not apply to Balfour Beatty’s work. Most of it is in [nearby] Somerville and Medford, where mayors have not yet ordered shutdowns.”

The source added: “[The line] is a project of the Massachusetts Department of Transportation MBTA, a state agency which has not announced job site closures.”

Most of the work on the scheme takes place in the open, which the source said, was “relatively adaptable to [recommended] social distancing and worker hygiene protocols.

“On the other hand, mayor Walsh’s action was taken primarily out of concern for craft labour in building construction, in which the covid-19 provisions are more difficult to implement.”

Last week, Lendlease was forced to shut its Google job at King’s Cross after a trade contractor tested positive for the virus. The site re-opened on Monday.

Nearly 2,000 people have tested positive for coronavirus in the UK with the number of people who have died now at 71, up from 55.