Contractors to bid for first £400m of academies

The government will fire the starting gun on £400m worth of academies projects over the next few months, Building understands.

The spending is the first half of £800m worth of projects that were given approval earlier this year. The total amount of funding for the 71 remaining schools will be phased over two years.

The schemes will be procured using the academies framework, run by Partnerships for Schools (PfS), which includes 15 contractors. Some of the schools are likely to be procured in batches.

The framework will also be the main procurement route for free schools. Groups setting up schools are being told by officials to use the framework unless they can demonstrate that a different route offers better value.

PfS is advising the groups proposing free schools on building projects and on potential sites. It has also begun buying sites on behalf of the government for free school groups, including schools and warehouses and a garden centre in Norfolk.

The news for contractors on the academies framework emerged as Tim Byles, chief executive of PfS, revealed that the fast-track procurement used on the £10.6m Campsmount Technology Project in Doncaster, had saved £4m in procurement costs.

Byles confirmed the savings on the scheme, which used the framework and was procured in 22 weeks rather than over the typical 48 week period, at the BSEC conference in London last Thursday. The forthcoming academies projects will adopt a similar streamlined procurement.

Byles said: “I’m encouraged by the amount of savings we have found. I can’t give detail, but the Sebastian James review is looking at greater standardisation, the role of the centre in organising schools and new ways of financing.”

The £800m academies funding will go to the academy projects put on hold by the government at the same time as it cancelled the £55bn Building Schools for the Future programme last July.

The Sebastian James review, which will put forward an alternative programme for investment in school buildings, has still not been published despite an original deadline of last December. It is now not expected to appear until late March at the earliest. 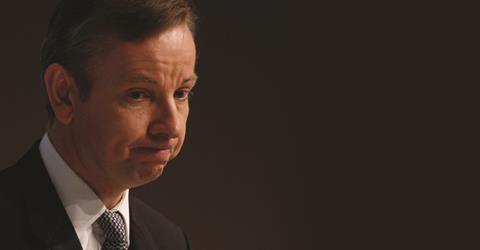 What we think of Gove…

What do you get when you invite school building experts to post a comment about Michael Gove (left) and the government on a wall at BSEC? A mix of the barbed and the witty. Here is a selection of comments stuck on post-it notes under caricatures of Michael Gove and Lord Hill …

Clowns to the left of me, jokers to the right.
Here I am, stuck in the middle with you.
Cowards
Thanks for coming
Cut spending, cut jobs
Localism: what happens to the wealth of expertise so far?
Re-inventing the wheel again
What James Review?