Core Five has set up an office in Birmingham as it looks to capitalise on a growing workload in the country’s second city.

The news comes as the firm said it has appointed five new partners which has seen the firm raid Turner & Townsend and Deloitte for staff.

The Birmingham office is in the middle of the city and will be headed by two of those new partners, James Bradley, who has moved back to his home town from London, and Matt Viall, who joined two weeks ago after three years at Turner & Townsend.

Viall knows the Core Five founding partners from their time together at Davis Langdon before the firm was set up back in 2012.

Explaining the decision to open in Birmingham, Core Five founding partner James Clark said: “Birmingham is a burgeoning market and having an office there gives us closer access into the Midlands and north.”

He added that another founding partner, Chris Amesbury, will have overall responsibilty for the Birmingham office although he will continue to remain at its London office on Blackfriars Road.

Clark said the firm is eyeing between 20 and 30 staff for the new office and fee incomes of around £3m over the next four to five years. “My expectation is that we’ll be recruiting from the Birmingham market,” he added.

The firm has worked on Argent’s Paradise mixed-use scheme (pictured) in the city and is also carrying out work for German finance giant Deutsche Bank which has offices in Birmingham’s Brindleyplace district.

Clark added that Core Five’s expansion plan would be limited to Birmingham for now. “We’ll leave it there and see how we get on.”

The firm has also promoted made three more people to partner – Simon Lofty from its residential arm and Leighton Miller from its arts team. And the firm has brought in Gary Duncumb, an M&E specialist who joins from Deloitte.

Core Five is working on a string of high-profile schemes in London, including Almacantar’s Marble Arch Place mixed-used scheme, which Multiplex is building, as well as the Broadgate redevelopment for British Land.

The business currently employs around 120 people but Clark said this will grow as the firm looks to take its current £15m turnover up to close to £20m over the next four years. 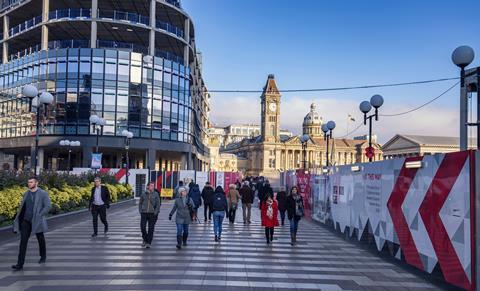 The Paradise scheme is being developed by Argen