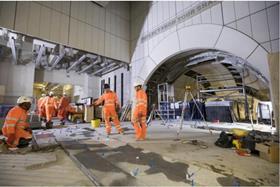 The outgoing chief executive of Costain has said its scheme to build a new Crossrail station at Bond Street has not finished because of changes made to the scope of the work.

Costain is carrying out the work in joint venture with Skanska having been awarded the deal, then worth £110m, back in February 2013.

Work was supposed to complete in February 2017 but Transport for London has raised concerns the job might not now finish until next year.

But Andrew Wyllie, who leaves the top role at Costain in May after 14 years at the helm, said: “Our contract isn’t late, there have been a number of changes in regard to the contract and we are completing the contract in line with the programme.”

He added: “[Questions] about the Crossrail programme [are] obviously for them.”

Last month the new chief executive of Crossrail, Mark Wild, said not even half of the complex M&E work at the scheme’s nine central London stations had been completed.

And yesterday he admitted the Crossrail scheme would not open this year.