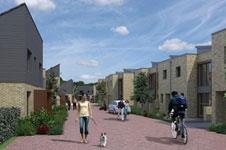 Detailed planning consent has been given to housebuilder Countryside Properties for its 286-home Glebe Farm scheme near Cambridge.

The scheme, which is the first part of a wider 2,000-home development on the neighbouring Clays Farm site, has been approved despite an ongoing wrangle between Countryside and Cambridge council over the level of affordable housing on the developments.

Last month Countryside lost an appeal to build less than the 40% affordable housing expected by the council on the site, saying it would destroy the viability of the scheme.

Despite this, the company this week said it expected to start on site at the end of the year, subject to finalising planning conditions.

All homes will meet level three or four of the Code for Sustainable Homes, and the development will include allotments for residents.

Chris Crook, subsidiary managing director, Countryside Properties, said: “The unanimous vote in favour of this development will allow us to help ease the current acute housing shortage in Cambridge. We will be investing heavily in local transport, education and community infrastructure.”

Peter Studdert, director of Joint Planning for Cambridge's Growth Areas, said: “This is a major step forward in providing much-needed new homes for Cambridge. An enormous amount of work has gone in to the scheme design.”