Sunderland City Council is looking for a contractor to build a construction academy which it hopes will give locals the skills to build low carbon housing stock for the region.

Firms have until 13 May to bid for the £13m contract to build the city’s Housing Innovation and Construction Skills Academy (HICSA), paid for in part by the government’s Levelling Up Fund.

The proposed training academy and innovation hub was green-lit by a council planning committee at the end of March and is intended to create a local workforce equipped to build low-carbon housing using modern methods of construction. 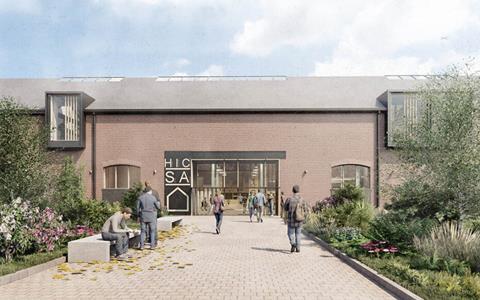 Plans for the building involve the conversion, restoration and two-storey extension of the existing Engine Shed structure in the Sheepfords neighbourhood near Sunderland FC’s Stadium of Light.

The district forms part of the Riverside Sunderland urban redevelopment project, within which the city council intends to build 1,000 new homes.

The HICSA project has been developed by the city in partnership with Education Partnership North East – which will operate the facility – and the Ministry of Building Innovation and Education, a group set up by Sunderland-born TV architect George Clarke.

When the project received planning permission, Clarke described it as “game-changing” and said it was an opportunity for the city to “play a leading role in defining how homes of the future look”.

The most recent Autumn budget included £9m of levelling up support for HICSA. A further £11m from the fund will assist the development of new sustainable communities in Riverside Sunderland and Sunniside.

The council is hopeful that the training centre will help it achieve its aim to be a carbon neutral city by 2040 by enabling the decarbonisation of its housing stock.