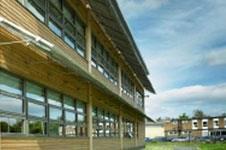 Defra's Lion House in Alnwick has become the first building to be awarded a post-construction "Outstanding" rating, under the new BREEAM environmental assessment methodology. The building was amongst 16 projects to receive recognition in the 2010 BREEAM awards, which were presented at Ecobuild.

Lion House, which was originally assessed and certified under BREEAM 2006, was reassessed under the new BREEAM 2008 rating system and is the first building to be awarded a final Outstanding rating. The project received the OGC Special Award for Government Sector Achievement.

The G Park Blue Planet development was recognised as the first building to be awarded a BREEAM Industrial – interim – "Outstanding" rating while architects Stride Treglown's new office in Cardiff, due for completion in 2010, was also awarded an interim "Outstanding" rating under the BREEAM Office category.

The buildings shortlisted for the awards were drawn from those achieving "Excellent" ratings under various BREEAM schemes during 2009. To gain an "Excellent" rating developments must earn most of the performance credits available in the areas of: energy, materials, waste, water, ecology, pollution, transport, management, and health and wellbeing. The award winners are:

Defra's Veterinary Laboratories Agency Stores facility near Weybridge in Surrey
Architect: Wilson Mason & Partners
Contractor: Walter Lilly
Aiming for the best possible green strategy from the very outset of the project, Defra and all members the design team worked together to achieve an exceptionally high overall BREEAM score of nearly 84%.

Centrum Galerie, Dresden, Germany
Architect: Peter Kulka Architektur Dresden GmbH
Developer: Multi Development Germany GmbH
Dresden's biggest shopping mall and the first building in Germany – and the first shopping mall in continental Europe - to receive BREEAM Excellent. The development combines the careful use of resources and optimal energy and space consumption, with the use of advanced energy saving and other technologies.

Rogiet Primary School
Architect: White Design
Contractor: Willmott Dixon Construction
Sustainable design principles have been followed from the outset and integrated with the children's education. For example, landscape design includes a nature garden area and a pond for wildlife study, and an eco wall in the library includes displays of energy use and rainwater capture.

G Park Blue Planet
This 35,500m² building was the first development to achieve an interim Outstanding rating under the new BREEAM 2008. Highlights of its sustainability include a plan to power the whole development through a biomass plant located on one edge of the site to provide heating and electricity, highly water efficient fittings, a rainwater harvesting system and significant ecological enhancement of the site. Developers Gazeley estimate that the environmental features in the building will save up to £300,000 a year in running costs.

Stride Treglown's new office in Cardiff, due for completion in 2010.
This building is designed to accommodate over 50 staff on two floors in an open studio arrangement. It adopts a paper insulated structurally insulated panel system for supporting walls, roof and floors. The building is located on a former industrial service yard and provides facilities for cycle storage, showers and drying facilities, whilst car share parking spaces are given priority. Green Guide A or A+ rated materials are used throughout.

Unibail-Rodamco's Docks 76, which is the new 36,000 m2 shopping and leisure centre in Rouen. Both the Agrivin and Docks buildings, which are part of Docks 76, achieved the first certification under the new BREEAM Europe Retail scheme for shell and core at the design stage. Particular features of the design which helped achieve this rating including the re-use of an existing building on-site, thereby avoiding the environmental impact of demolition and reconstruction, and a 20% reduction of electricity consumption through the use of natural ventilation. The development also incorporates leak detection systems and water-saving features and the use of water by visitors is expected to be reduced by 30%.

The British Embassy, Berlin
This was originally opened by HM The Queen in July 2000 and is managed by Johnson Controls GWS on behalf of the Foreign & Commonwealth Office. It achieved a "Very Good" rating for Part 1: Asset Performance and Part 2 : Building Management Performance under the new scheme. BREEAM In-Use was launched in March 2009 to help building managers reduce the running costs and improve the environmental performance of existing buildings. BREEAM assessors TPS Consult played a key role in the development of this new scheme specifically for the Foreign and Commonwealth Office.