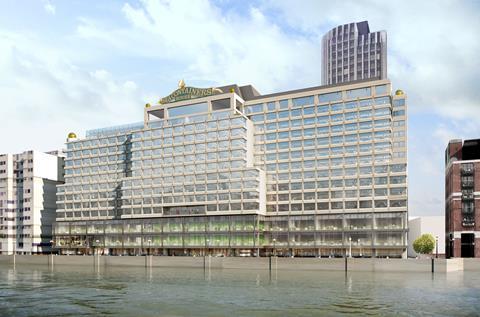 TP Bennett has unveiled designs for the revamp of Sea Containers House on the South Bank in London.

The redevelopment includes extensive work to overhaul the facade of the building, which will retain its characteristic golden globes and signage.

TP Bennett also plans to refurbish the 28,000m² building to create a “destination hotel”, a restaurant and office space.

The Thames-side building was originally conceived as a luxury hotel but was reconfigured as offices before it opened in 1978. It is named after its original owner, an international shipping company.

The scheme, backed by property company Archlane, includes new shops at the rear of the building and improved public areas with a wider riverside walkway. The project is currently out to public consultation.