Scheme being developed by Peabody 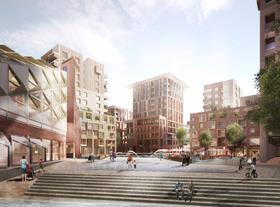 Durkan has signed a contract with Peabody to deliver a major phase in its Thamesmead regeneration project.

Durkan is set to deliver the Southmere Village Phase 1A, which is worth £45m.

The firm will design and build 130 new homes, an energy centre with associated district heat network, commercial space and parking and a range of formal and informal public spaces.

Construction of the town square (pictured) will get underway during phase one, with work likely to continue into subsequent stages.

Peabody plans to transform Thamesmead with 20,000 new homes as part of its 30-year plan for the district.

The area will also benefit from strong transport links including Crossrail thanks to the new station in Abbey Wood.

The firms are the final two bidders vying to work with the housing association to build 11,500 new homes in the London borough of Greenwich.

The winner, who will be chosen this summer, will also help transform 1m sq ft of town centre commercial and leisure space.