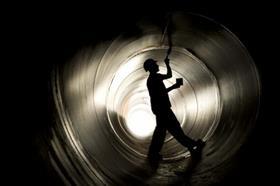 Today Thames Tideway announced the shortlist of eight contractor consortiums for the three main packages of work, worth up to £2.25bn.

The eight consortiums include 10 overseas firms, including Bechtel, Dragados, Hochtief and Samsung, alongside eight UK firms. The project will operate at 24 sites across London as well as underneath and alongside the Thames.

Thames Tideway has said that although consortiums can be shortlisted for more than one lot they will not be appointed to do multiple contracts.

Mike Gerrard, managing director of the Thames Tideway Tunnel, said it would be “the biggest tunnelling project ever undertaken in the UK’s water industry”.

He added: “We have shortlisted the contractors with the right expertise and experience, who will deliver the best value for money for our customers.

“We are following a rigorous tender process and are confident the successful tenderers are capable of delivering the project.”