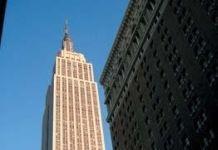 The Empire State Building, born in a great recession, is to set the trend during another by going green.

The world’s most famous office building will get an energy makeover that will slash its carbon footprint by 38% and could provide a model for green retrofits worldwide.

The program will also encourage property tenants to reduce energy use through:

Anthony E Makin, of building owner Empire State Building Company, said the firm was expecting clear results from the investment. He said: “This innovative process, which has developed new techniques for modelling and organizing an integrated program, offers a clear path to adoption around the world, leading to significant reductions in greenhouse gas emissions.”

Former president Bill Clinton said the recession offered a chance to make energy cuts. He said: “In this distressed economic climate, there is a tremendous opportunity for cities and building owners to retrofit existing buildings to save money and save energy. It is this kind of innovative collaboration that is crucial to protecting our planet and getting our economy up and running again.”

About 3,400 workers built the Empire State Building. It was completed in 1931 in 16 months in a ferocious competition to build the tallest skyscraper in the world. Much of the office space remained unrented as a result of the great depression. Indeed, the famous observation deck took in more money than the building did in rent in the first year of operation.